Here come the girls – and they are armed to the teeth! Straight from the Viking sagas, visitors to York this February will see Norse warrior women fighting alongside – and occasionally leading – male warriors, as the JORVIK Viking Festival explores the untold stories of women in the Viking age. “In the last 12 months, we’ve seen huge celebration of women gaining the vote in England, following centuries of having limited rights compared to their male counterparts, but many people will be surprised to learn that Viking women held many rights – including the right to own and inherit land – that were washed away by the Norman invasion, not to be regained for another eight or nine hundred years,” comments marketing manager, Beth Dawes. “This year, JORVIK Viking Festival will explore the strong women of the Viking era – queens, explorers and warriors – and the academic debate around female warriors.” Despite common perceptions of Vikings as bearded, burly men, women have played a role in JORVIK Viking Festival for many years. “For the re-enactors that participate in the Festival, women play a crucial part – both on and off the battlefield. Some choose the role of supportive wife, but for many years, others have chosen to don mail vests and get stuck into the combat re-enactments,” adds Beth. “When someone is running at you, fully armoured with a raised axe or sword, screaming behind their shield, gender is the least of your worries – man or woman, you know you have to fight for your life!” 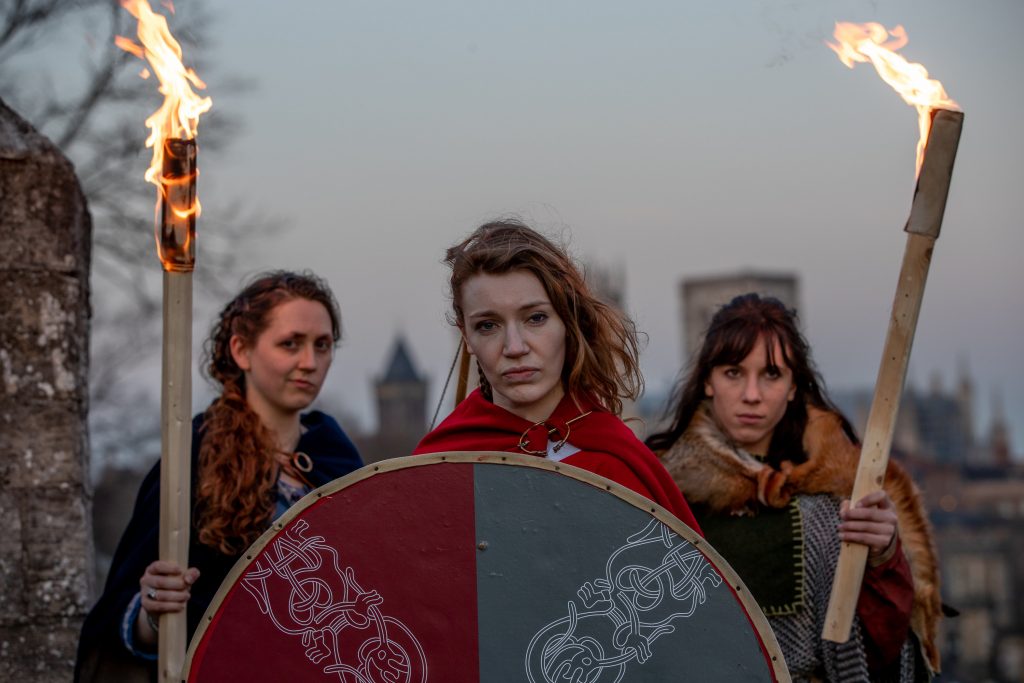 Visitors will see the Shield Maidens in action during the Battle Spectacular at Folkvangr Fields, which takes place at the Eye of York on the evening of Saturday 23 February. They will join over 200 Vikings for the March to Coppergate, a parade from York Minster to the JORVIK Viking Centre earlier in the day, which regularly sees tens of thousands of visitors line the streets for the largest Viking Festival in Europe. The Festival opens on Wednesday 20 February, and includes living history encampments, craft demonstrations and workshops, mead sampling and a Viking feast as well as the sell-out son-et-lumiere Battle Spectacular. The event also draws academics from around the world to a lecture programme built around the theme of Viking women.

Alexis Wilson-Barrett is a Co-Founder of The Yorkshire Press and works as our Editor for North and East Yorkshire. She studied for her BA (Hons) at the University of Bradford and now works on a freelance basis from her home in Skipton, offering content and marketing support to businesses across the UK

Meet the Yorkshire Grandad Who Won Millions in Las Vegas

8 of the Best Restaurants in Filey

14 of The Best Farm Shops in Yorkshire

New tourism experience, Route YC, dares you to take on the Yorkshire Coast like never before

8 Fun & Affordable Ideas For Family Days Out in Yorkshire