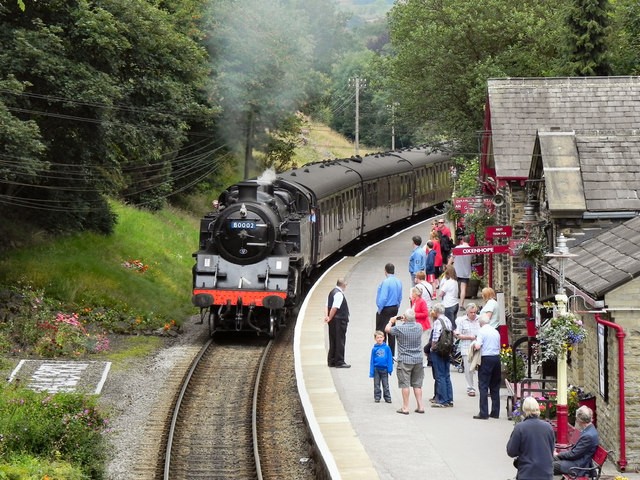 Haworth Train Station is the largest of all the train stations of the Keighley and Worth Valley train stations. It has an interesting Victorian architecture which is typical of this period and has been maintained exceptionally, which makes it a popular destination for trainspotters and history buffs alike.

Due to its status as a tourist destination, the original waiting room has been converted into a shop, which sells all manner of related merchandise to visitors. It also serves as the centre for any maintenance work which needs to be carried out on the locomotives. The main workshop is now based in what was once the goods yard, a little down the road from the station itself.

When the railway began life, it was built with a double track, with bridges wide enough to allow for a second line to be added at a later date. This was only completed between Keighley and the junction with the line north of Ingrow.

Beyond visiting Haworth station to soak in its history, there are various experiences which allow visitors to immerse themselves further into the character of the station. These include a number of Vintage Trains, which still run to this day, with some hosting dining experiences which are relatively reasonable and there is often a Brass Band who play at the station in order to add atmosphere to the experience. The Keighley and Worth Valley Railway experience also offer a number of seasonal events, including the Santa Steam, which embraces the spirit of Christmas and is enjoyed by many locals each year.

Prices vary dependent on the type of experience you’re looking for, a simple journey can be bought for £5 return or £3 single for First Class Carriages.

Haworth Train Station is one of our 4 of the Best Things To Do in Haworth.

6 Surprising Reasons Why Haworth Is Twinned With Machu Picchu