The coastal town of Whitby is one of Yorkshire’s most popular tourist destinations. With its old cobbled streets, famous abbey ruins, pretty harbour and glorious sandy beaches, it’s perfect for a day out at the seaside of a family holiday. Here is everything you need to know about Whitby in North Yorkshire. 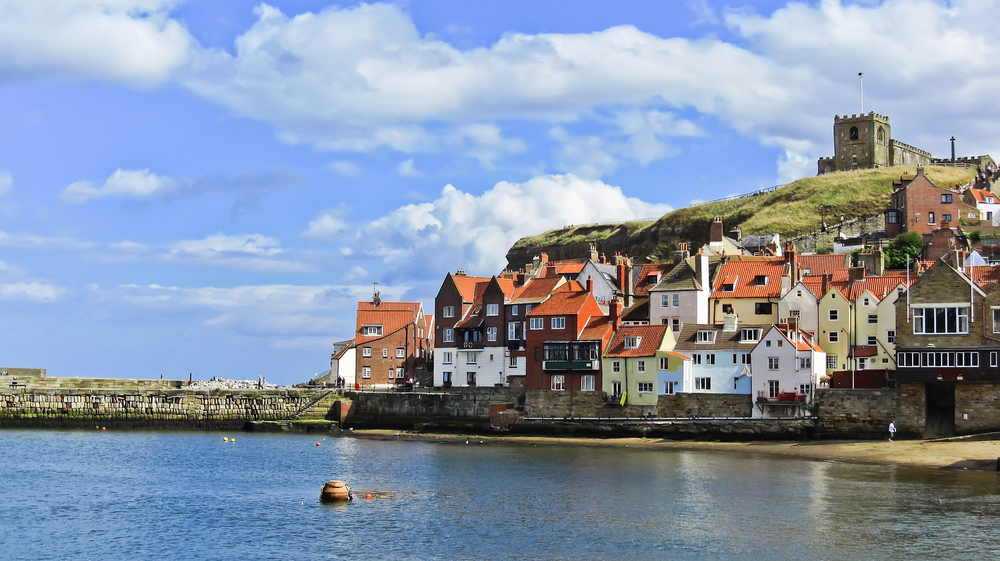 Whitby is part of the Scarborough borough of North Yorkshire and is situated on the east coast at the mouth of the River Esk. On one side of the town, you will find the North Sea, on the other, the picturesque North York Moors so it really is quite idyllic when it comes to location. The town is situated on the A171 road from Scarborough to Guisborough and Whitby railway station is accessible via the Esk Valley Line from Pickering.

Divided by the River Esk, Whitby is essentially split into two parts with the east side being the oldest. On this side lies Whitby’s famous abbey ruins and it was this monastery which was the founding point for the town way back in 656 AD. Near to the abbey, there are various indications of a Roman lighthouse and a small settlement so the town could well date back much further.

Many of the houses and buildings on Church Street date back to the 15th century, but the earliest recorded dwelling place in this area was documented in 1370, near the 199 steps. This area of town is now home to quaint holiday cottages and lots of quirky independent shops and cafes.

Whitby’s West Cliff has two historical points of interest – the Royal Crescent where Bram Stoker stayed in a guesthouse for the visit which inspired his famous novel “Dracula, and the famous Whale Bone Arch which was erected in the 19th century to pay homage to Whitby’s success in the whaling trade.

Whitby’s impressive history doesn’t stop here however. It’s most famous resident, Captain James Cook, is is celebrated via statues, displays and visitor attractions throughout the town. Cook began his career in the town whilst employed as an apprentice at Walker’s House on the east side of Whitby and he returned to the same residence after his maiden voyage.

With it’s rich maritime history and literary connections, there’s plenty to see and do in Whitby for history lovers. Whitby Museum in the beautiful Pannet Park and Gardens is brimming with interesting artefacts and fascinating displays.

The Captain Cook Memorial Museum and the newly built HM Endeavour replica, both offer a great way to learn about the town’s most famous resident. For those wishing to see Whitby from a different perspective, there are various boat trips available throughout the day including The Captain Cook Experience which is a wonderful replica of Cook’s Endeavour and takes you on a 25 minute scenic trip out to sea.

No trip to Whitby would be complete without climbing the 199 steps to St Mary’s Church and the famous abbey ruins which inspired Bram Stoker’s ‘Dracula’. From up here, the views of the area are truly breathtaking. To delve further into Whitby’s link with Bram Stoker, the Dracula Experience on the west side of the river is most certainly worth a visit.

Whitby is full of great traditional pubs and independent bars so you can’t go far without stumbling across somewhere great to enjoy a craft ale or cheeky G&T.

As regards to food, Whitby is most famous for it’s delicious fish and seafood, so understandably most of the eateries in the area are fish restaurants. The Magpie Cafe and Trencher’s Restaurant both serve award-winning fish and chips and long queues can often be seen outside both establishments during peak times.

However, if fish isn’t your thing, don’t think you’ll be limited for choice in this coastal town. There are a great number of independent restaurants and cafes serving delicious grub of all varieties.

If you’re looking for something a little lighter, then there are some great little places in Whitby offering afternoon tea. Head to The Edge and treat yourself to a tiered platter of local fish and chips, fresh scones and a variety of cakes.

For an indulgent treat, head to newly opened Shake it Up and sample one of their delicious mega shakes. Made with local ice creams and topped with yummy sauces and tasty goodies, they’re perfect for sharing on a hot day. You can even order a milkshake which is served with a whole slice of homemade cheesecake on to

Children From Separated Homes Can Move Between Households

VIDEO: Yorkshire’s James Newman to Represent the UK at Eurovision 2020