Wondering where to find the best sushi in Leeds or have you got a craving for ramen or miso soup? Luckily for you, there are various Japanese restaurants in Leeds to help appease your appetite.

Leeds’ restaurant scene has boomed recently, with more and more eateries opening their doors. New and exciting concepts are appearing on the regular, which can make keeping up with it all a minefield. But don’t worry, today we’re rounding up the best Japanese restaurants in Leeds, to help you satisfy your cravings of the orient!

On the list, you’ll find fine dining with a twist, as well as more relaxed, informal venues – perfect for lunch or a catch-up. No matter your price point, if Japanese is on the agenda, you’re well catered for in Leeds.

Find The Best Japanese Restaurant in Leeds For You! 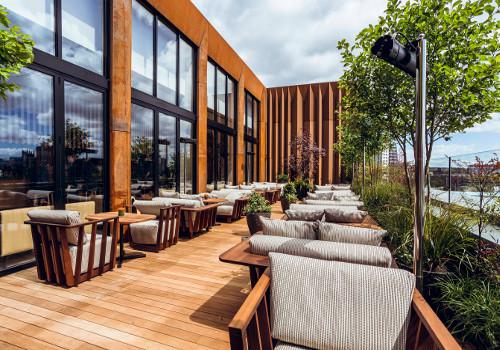 Within the multi-million-pound shopping arcade Victoria Gate, you’ll find D&D restaurant’s Issho. From the same people who brought us Angelica and Crafthouse, the quality is fantastic. What’s more, the attention to detail is on point, making it a great experience Their latest restaurant, focuses on authentic Japanese food, whilst retaining a contemporary feel.

Their menu is creative and contemporary but includes all the Japanese classics like sushi and gyoza. What’s more, their Afternoon Tea in Leeds is an experience in itself and offers something a little different if you’re after something special.

Teppanyaki showcases a quintessentially Japanese style of cooking which revolves around grilling. In fact, the word Teppan means Iron Hot Plate and Yaki means “to grill.” Well known for their welcoming yet sophisticated service, if you’re looking for somewhere with a social atmosphere, you could do worse than Teppanyaki.

Perfect for those looking for something a little out-of-the-ordinary, their menu includes all kinds of wonderful dishes. Slap bang in the centre of Leeds, on Belgrave Street, eating here is a real experience.

Depending on what you’re looking for, you can enjoy set menu’s ranging from £25 up to £44. If Sushi or Sashimi is what you crave, they’ve got that too, with smaller portions starting at £3.75 and more substantial selections up to £17.95. 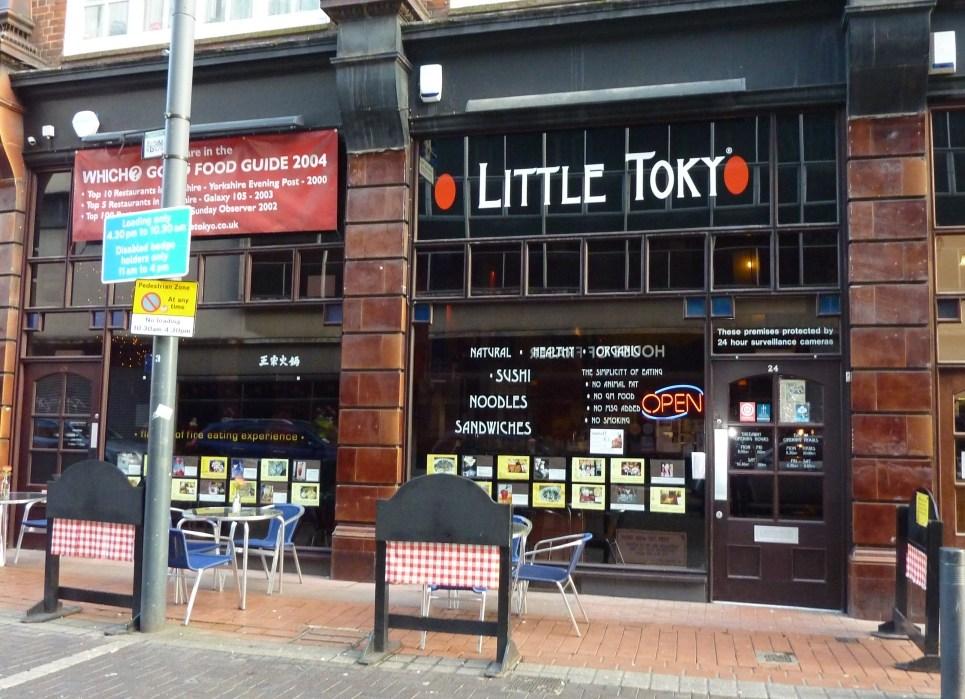 Highly regarded for its diverse menu of Japanese classics, the aptly named “Little Tokyo” has been dazzling restaurant goers for about 20 years. Having been one of the first restaurants in Leeds that specialises in Japanese cuisine, it’s built up a great reputation for having great service and delicious food.

Visit at lunchtime and you can take advantage of their spectacular selection of “Bento” boxes, which include a selection of delicious Japanese treats. Head there on an evening and you’ll find a restaurant with a vibrant atmosphere.

Their menu’s perfect for both first-time Japanese diners yet is complex enough to appeal to the experienced. Whether you’re pining for Sushi, Gyoza or any number of dishes – you can’t go wrong at Little Tokyo. 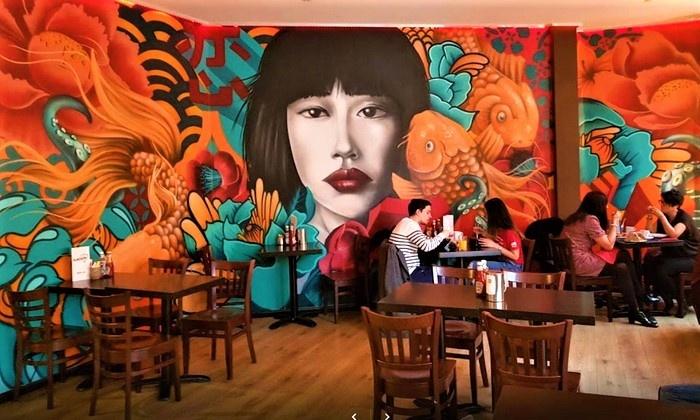 Close to the County Arcade, you’ll find Kobito. Another Japanese restaurant in Leeds with a big reputation, the striking street art covered walls of Kobito’s interior has a big selection of dishes on the menu.

A favourite among many, their eclectic yet carefully crafted menu is available for take-out too. A firm favourite for many, Kobito’s definitely one to put on your list. Away from the City Centre, HanaMatsuri is something of a hidden treasure in Leeds. If you think this unassuming Japanese eatery doesn’t look like much from the outside, that’s because the food is the star of the show here.

Owner Kaora Nakamura set up shop in 2013 and has skillfully recreated the joys of casual Japanese dining. As a result, it’s one of the most critically renowned Japanese restaurants in Leeds.

So if Tokyo-standard sushi’s on the agenda, HanaMatsuri is certainly the place to be. A contemporary styled restaurant in the centre of Leeds, Yokohama specialises in both Japanese and Korean cuisine. Their menu contains over 100 dishes, which makes it the Japanese restaurant in the roundup with the biggest selection.

As a result, they’re a great destination for friends and family to enjoy a meal. With something for everyone, whether you’re a fan of Sushi, noodles or Grilled food, you’re catered for here. 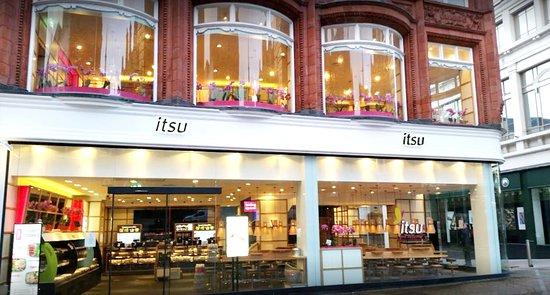 One of the leading Japanese food brands in the UK, there’s an Itsu in pretty much every major city. Although some prefer opting for the more intimate offering of the independent eateries, you can’t deny they’re on to a winning formula.

Because of their national success, they’ve got an accessible menu. As a result, it’s one of the most Anglo-friendly Japanese menus in Leeds. Consequently, they’ve got a wide range of sushi, ramen and other Japenese inspired dishes on the menu. 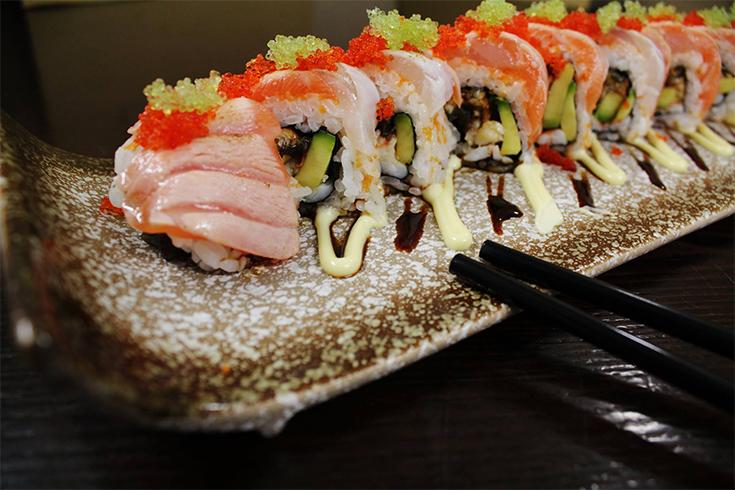 Found next door to a karaoke bar, Sushi Waka is well known for their extensive menu of sushi and other Japanese dishes. Toppings include everything from scallops, octopus, tuna, salmon, prawns and many more.

In the centre of town, on Lower Briggate, as a result of their intricately crafted Japanese cuisine, they’ve developed a big reputation and have the food to live up to it. 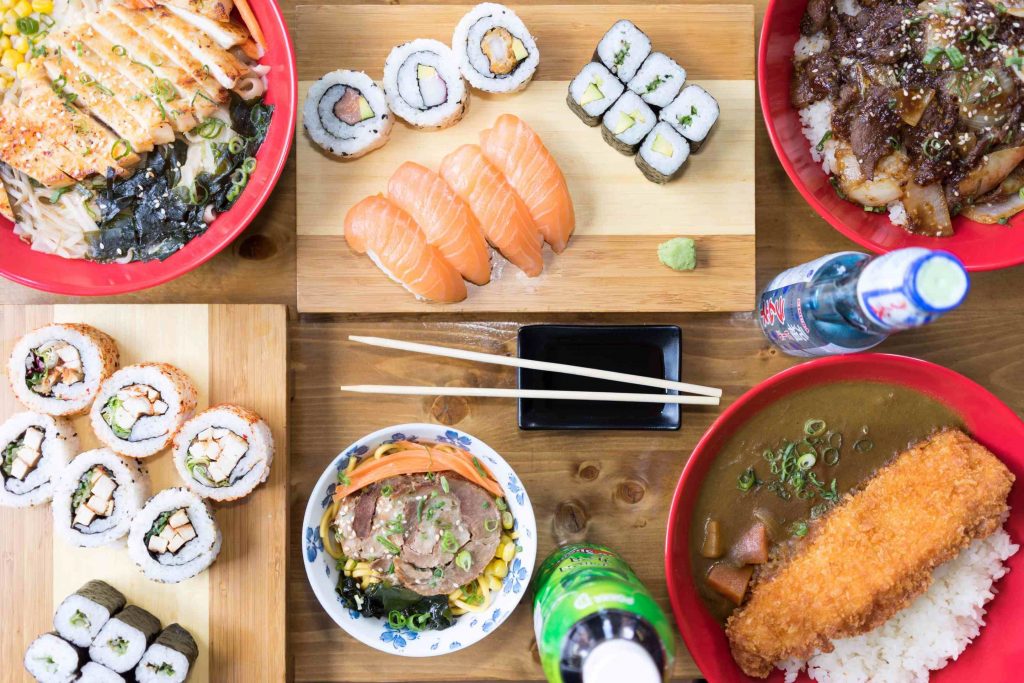 With unassuming decoration, Senbon Sakura is another hidden treasure. Due to its understated exterior, it’s often overlooked. However, within this intimate restaurant, you’ll find a range of options, ranging from the usual Sushi to delightful bent boxes.

As a result, Senbon Sakura is perfect for lunch. In the evening, their menu expands with more formal and substantial dishes available. So if you’re a fan of gyoza, ramen or have a general hankering for affordable Japanese down to earth cuisine – it’s one to add to your list. As their name suggests, Juici Sushi’s strengths lay firmly in their sushi. Using an eclectic range of toppings, like locally sourced salmon and other wonderful seafood – they’re perhaps best known as a lunch destination.

Relaxed, friendly and affordable, their chicken katsu, teriyaki and extensive range of sushi is perfectly suited for a payday lunch if you work nearby, or are in the area shopping. A little out of the city centre on Britannia Street, if in doubt, the team are happy to make recommendations.

Skipton To Be Considered As Tour de Yorkshire Hosts 2020

The Most Affordable Areas For First Time Buyers in Bradford

Concept Tavern to Launch a New Beer, Gin and Gaming Hall in Leeds

The Most Affordable Areas For First Time Buyers in Bradford