Facts About Leeds – What Is Leeds Famous For?

One of the biggest cities in the UK and the economic capital of Yorkshire, Leeds has a long and vibrant history. Music, sport, politics and art are just a few of the areas where Leeds has made its name. As a result, there are plenty of things that Leeds is famous for. From best selling authors to multi-national brands, it’s difficult to imagine a world without Leeds.

Leeds is famous for being the birthplace of many famous people and brands. Retailer Marks and Spencer opened their first shop in the Kirkgate Market over a hundred years ago. First World War Prime-minister Henry Herbert Asquith was born in Morley. Leeds United were once a top flight football team which dominated the sport for many years. As well as the famous names to be born in Leeds, it has a rich industrial history and once produced much of the worlds cloth as well as other materials.

With that in mind, I thought it’d be fun to share some of the most interesting facts about what Leeds is famous for. There are some surprising and little known gems, as well as some more well known things about the fantastic city many of us call home.

Fizzy drinks were invented in Leeds 250 years ago

Fizzy drinks first came about in 1767, when Joseph Priestley discovered a way of infusing water with carbon dioxide. After suspending a bowl of water over a beet vat at a brewery in Leeds,  The result was a cool  refreshing beverage and he soon began offering it to friends. In a paper published in 1772, he described how he developed his process by dripping Sulfuric Acid onto chalk to produce carbon dioxide and then encouraged the gas to infuse with water.

During the later part of the eighteenth century, J. J Schweppe developed a new process for producing carbonated mineral water, based on the process discovered by Priestley. It was from here, that the Schweppes brand was born.

Jeremy Paxman was born in Leeds

Award-winning Journalist, Author and TV Presenter Jeremy Paxman was born in Leeds in 1950. He spent only a very brief part of his life in Yorkshire before being raised in Hampshire and educated at Cambridge University.

Back in 2006, Jeremy took park in the BBC television programme ‘Who Do You Think You Are?’  to discover more about his ancestry. It was during this time that he learned most of his paternal ancestors were from God’s Own County. Despite being raised in the south, Paxman has always been proud of his Yorkshire roots:

“I’ve always been very proud of the fact I was born in Yorkshire because it’s one of the few counties that has a very definable sense of itself.”

JRR Tolkien was a professor at the University of Leeds

Yorkshire is often cited as one of the main inspirations for JRR Tolkien’s classic ‘The Lord of the Rings’. Although many will know that there’s a connection between the influential writer and Leeds, few people know the full details. 1920 was the year that he took up a position as Reader in English Language at the University of Leeds.

He later became a professor at the university. In a description of Tolkien’s connections with Yorkshire, Dr. Lynn Forest-Hill of the Tolkien Society said “Tolkien’s familiarity with Yorkshire began in 1916 when he went on a course at Otley but the county’s scenic influence on his work began somewhere around late May or early June 1917 when he had been posted to the Humber garrison.”

It’s likely that during his Professorship in Leeds, Tolkien became influenced by the dramatic Yorkshire landscapes, which are familiar in the descriptions of the Middle Earth that he famously created as the backdrop for his epic tale. 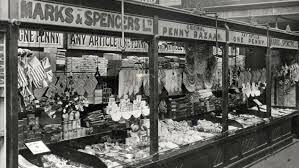 Benchmarking quality in British retail in 2019, Marks and Spencer has a far reaching reputation as one of the leading shops in the UK. But did you know that the now prestigious brand has humble beginnings, within the Kirkgate Market no less.

It was in 1884 when Polish immigrant Michael Marks opened his now famous Penny Bazaar. After years of successful trading, Thomas Spencer, who was from Skipton (about 45 minutes from Leeds by train) invested in the idea and the brand Marks and Spencer was born.

In 2019, if you visit the Kirkgate Market – among the 800 traders you’ll find a homage to the original Bazaar. Although stocking a far smaller product line than the other shops in the chain, you can pick up a delicious coffee and enjoy standing in the spot where it all began.

Ernie Wise was born in Leeds

Comedy Legend Ernie Wise is best known for being one half of double act Morecambe and Wise who became a national treasure for their work on television – most famously their Christmas Specials.

Ernie was born in Bramley, near the centre of Leeds and grew up in the area. After meeting Eric Morecambe in 1940, they quickly became some of the most popular performers in the UK.

In Morley, a short distance from his birthplace of Bramley – there’s a statue of Ernie to commemorate his connection to Leeds.

The world’s first moving pictures were shot in Leeds

Cinema is undoubtably one of the most popular forms of entertainment in the world. Over the years, there have been countless advances in the field. And yet, the humble origins of the moving picture lay in Leeds.

Thomas Edison and the Lumiere Brothers are often cited as the origin of film. However, those of us from Leeds tell a very different story.125 years ago, on 14th October 1888, in a garden in Roundhay, a Frenchman named Le Prince shot a short silent film – which historians believe was captured several years before Edison and the Lumieres came to fame in the field.

Although it might seem unbelievable – it was the subject of a recent documentary and it seems to add up.

Arguably amongst the most controversial Prime ministers of the 20th Century – Henry Herbert Asquith was responsible for bringing Great Britain into WW1.

Bright, liberal and controversial, Asquith was born on the outskirts of Leeds in Morley. Over the years, he faced a lot of accusations and was eventually forced out of office. Although controversial, it’s undeniable that he played a big part in many major legislation changes – which impact the way that the entire of British society has developed.

Concept Tavern to Launch a New Beer, Gin and Gaming Hall in Leeds