Yorkshire Food – What Food Is Yorkshire Famous For?

Yorkshire’s one of the biggest and most diverse cultural hotspots in the UK. Food’s big business in “Gods Own County.” Brimming with countless restaurants, local producers and some of the UK’s leading food brands – there are few places in the UK which have such a strong food heritage. As a result, thousands of foodies put Yorkshire on their bucket list.

Perhaps the most famous food from Yorkshire is the Yorkshire Pudding. Restaurants all over the country and the world showcase this simple yet delicious food. It’s one of the main aspects of a traditional Sunday Lunch, can be served as a desert and even a starter. Other famous food’s from Yorkshire include Parkin, a sweet ginger cake. Wensleydale – the delicious cheese synonymous with Wallace and Gromit and Liquorice, a unique sweet with a distinctive taste that can be enjoyed in various forms.

Of course, there’s much more to the food from Yorkshire than just Yorkshire Puddings. Not only is Yorkshire home to some of the best restaurants in the country (there are 5 Michelin Star restaurants) there are lots of recognisable brands which are now part of everyday British life. 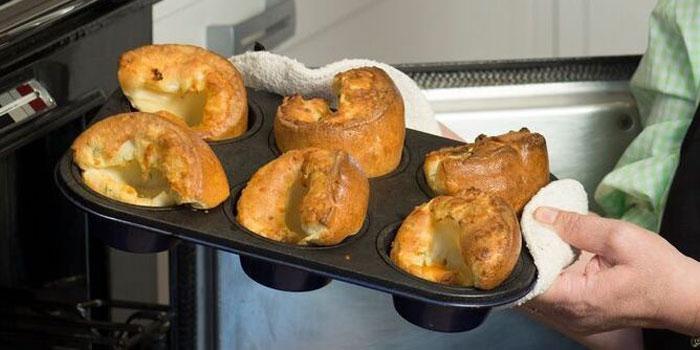 Synonymous with Yorkshire, the Yorkshire Pudding is a simple dish. Made from a mix of eggs, flour and milk or water – it comes in lots of different shapes and sizes. From small shop bought frozen puddings to enormous “giant” Yorkshire puddings, it’s a really versatile dish. Although most commonly thought of as a side dish, there are many in Yorkshire who will have enjoyed it as a starter or even a desert. It’s similar to a pancake but differs in the way that it rises to create often impressive doughy structures. In fact, food vendors and chefs up and down the country often experiment with the traditional dish and a recent fad saw the rise in popularity of “Yorkshire Pudding Wrap” which includes roast meats, gravy and even veg cased in a delicious Yorkshire Pudding.

Similar to a Cheese Cake, a Yorkshire Curd Tart is a delicious dessert which involves shortcrust pastry filled with curd cheese, butter, eggs, sugar, dried fruit and spices. It’s a dish that comes from traditional farming communities in Yorkshire. Having survived the test of time, it was featured on “Bake Off” and has seen something of a resurgence as a result. Visit YummyTasteFood.com for their featured piece on the Yorkshire Curd Tart, it’s history and origins.

This creamy, crumbly cheese was first made in Yorkshire 1150 by French Cistercian monks. After the dissolution of the monasteries under Henry VIII in 1540, the Wensleydale recipe was passed to local farmers wives so that the Yorkshire cheese could still be produced and enjoyed by locals.

The first creamery was built in Hawes in 1897 and despite tough trading times during the industrial depression of the 1930’s and rationing during the Second World War, the Wensleydale Creamery still handcrafts traditional Yorkshire Wensleydale Cheese and now contributes a whopping £12 million to the local economy each year.

If liquorice was a film, it’d be a cult classic. Sure, it’s not for everyone – it has a pretty strong taste that’s a bit unusual at first. However, the sweet, which is made from a type of root is a favourite in Yorkshire. Also used to flavour tobacco, the first place where liquorice was mixed with sugar was in none other than Pontefract. After that, the rest is history – and the delicious, peculiar tasting and strange looking confectionery lives on and will most likely continue to be popular for years to come.

Okay so, of course Rhubarb isn’t exclusively from Yorkshire. Yes, it’s found across the world. But a certain type of Rhubarb known as “Forced Rhubarb” has its origins in Yorkshire. Grown out of season and under peculiar circumstances, the popularity of Forced Rhubarb has seen an entire area of Yorkshire be named the “Rhubarb Triangle.”

The practise dates back to 1877 and was popular because of cheap coal for heading the forcing shed being readily available. Even to this day, Rhubarb crumble and custard is a staple of many Yorkshire families deserts. Tasting both sweet and slightly sour, there’s not much that can match a good crumble!

Seabrooks crisps are one of the best-loved crisp brands in the United Kingdom. The Seabrook brand began way back in 1939 when Charles Brook opened his first fish & chip shop in Bradford. Mr Brook chose “Seabrook” after seeing photographs where shopkeepers mistakenly labelled them with ‘Seabrook’ rather than ‘C Brook’.

After his son Colin returned from the Navy, they discovered they could make a different potato-based offering – crisps! Their first factory opened in in the 1950’s and they began delivering their iconic crinkle cut crisps to homes across the area. Business soon began to boom and decades later, theirs is still one of the most popular brand of crisps in the UK.

British biscuit brand, Fox’s, was founded in 1853 by Michael Spedding. He produced small quantities of ‘eatables’ from his bakehouse in Batley. Today, one of their most recognisable products has to be their ‘Party Ring’ biscuit. First produced in 1983, this simple ring-shaped iced biscuit is still a favourite treat for British children. Party rings were pitched to Fox’s without the hole. However, they decided removing the centre of the biscuit would make it much easier for little fingers to pick up.

Party Rings have changed somewhat over the years. Originally there were 5 bright colour combinations within each pack. Today, there are just three much paler toppings as the colourings used are now derived solely from fruit and vegetables.

Soft, chewy and super sweet – Jelly Babies are a delicious treat which have their origins in Yorkshire. Few sweet lovers in the UK will be unaware of the famous Sheffield sweet company Bassett’s. Jelly Babies are one of Bassett’s biggest sellers and were born as far back as 1864. But it wasn’t until 1918 when mass production began when the national love affair with the sweet started. Since then, you’d be hard pushed to find a British sweet cupboard where Jelly Babies don’t feature.

Sweet, vinegary and delicious are three easy ways to describe Henderson Relish. Historically, Henderson Relish was once one Yorkshire’s biggest exports. In fact, at one point, there wouldn’t be a home in Britain which didn’t have a bottle.

Another famous brand to come out of the Steel City of Sheffield, Henderson’s Relish that’s available today has remained largely unchanged for well over 150 years. Aptly named after the creator Henry Henderson, its legacy lives on today. As a result you can still pick up a bottle at your local supermarket.

Who said that Yorkshire was all about savoury food? Sure some of the most famous foods in Yorkshire are savoury, but we’re not without a sweet tooth. In fact, as well as Jelly Babies, both Smarties and Kit-Kats were invented here. Created by Rowntree’s of York in the late 1880s, they are two of the most popular snacks around. As a result, the marketing slogans of both sweets are recognised all across the globe. Take a break, have a Kit-Kat is probably one of the most well known slogans in the UK.

Who else but Rowntree’s of York could come up with a traditional sweet which has lasted well over 80 years. Interestingly, Polo mints were first developed in 1939, but production was halted because of the second world war.

Over the years, there’ve been countless iterations of the Original Polo Mint, but of course it’s the original that’s stood the test of time. Slogans from Rowntree’s are always delightfully creative, and who could forget “The Mint with the Hole.”

Chocolate lovers will be interested to know that Terry’s Chocolate Orange was originally marketed as “Terry’s Chocolate Apple.” Circular, solid and flavourful, the chocolate orange that we know today is one of the most gift-able types of confectionary there is. In fact, although I’ve eaten hundreds of them, I don’t think I’ve ever bought one for myself! Perfect for sharing, the most famous words associated with the brand are “Don’t tap it… Whack it!” As a result of that fantastic advertising campaign which featured Dawn French, the Chocolate Orange remains a favourite all over the country.

Although a few other places like to claim that they invented it, it was in the Chocolate Works factory in York where it was first invented. A delicious blend of orange flavouring and chocolate – we’re proud to say that it all started here in Yorkshire.

So there you have it, those are just a selection of the foods that Yorkshire is famous for. Everyone has their own favourite, or perhaps we’ve missed off your favourite… let us know in the comments below!

Proposals on Home to School Transport in North Yorkshire

8 of the Best Restaurants in Filey

14 of The Best Farm Shops in Yorkshire

New tourism experience, Route YC, dares you to take on the Yorkshire Coast like never before

8 Fun & Affordable Ideas For Family Days Out in Yorkshire

Proposals on Home to School Transport in North Yorkshire